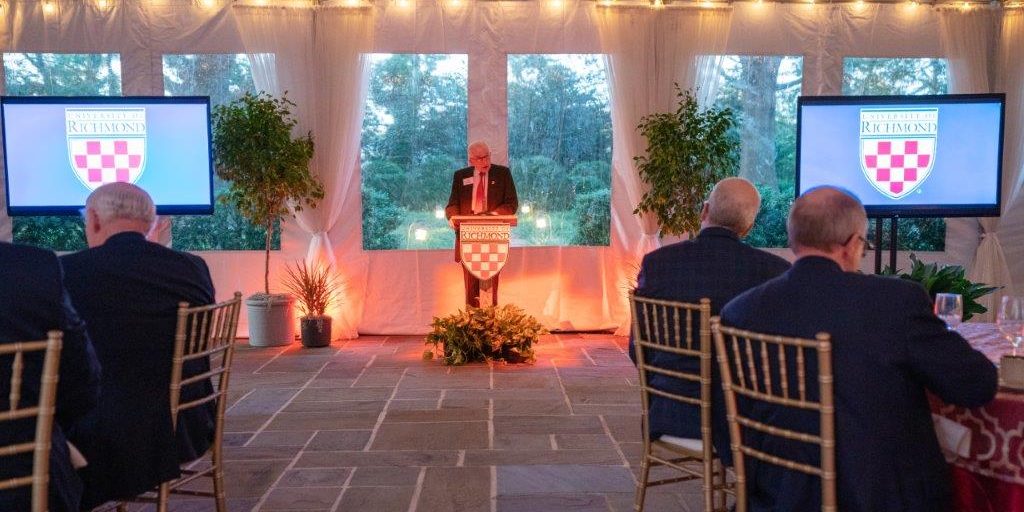 In April of 2019, we had a conversation with president emeritus of University of Richmond and longstanding Robins Foundation board member, Dr. E. Bruce Heilman. We asked him to tell us about an experience that inspired him to partner with Claiborne Robins in their joint mission to help youth reach their fullest potential. We talked about Dr. Heilman’s presidency of University of Richmond, his start working in higher education and Mr. Robins’ foresight. Dr. Heilman will always be a treasured member of the Robins Foundation family. 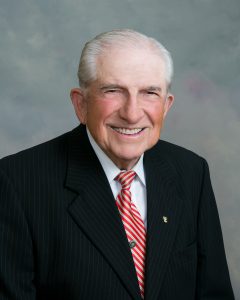 Becoming president of University of Richmond

I thought about a lot of things and finally concluded that my experience, above all others, was my first meeting with Claiborne Robins at my office at the Downtown Club, following my having rejected an offer to be president of University of Richmond. It was just the two of us for two hours with a cup of coffee in a closed room.

This was two weeks after meeting with the university committees. I had been with every committee – there must have been a dozen of them – and every one of them said I was their first choice. Still, I turned them down and went back to my presidency at Meredith College. And again, two weeks later, a board member came to persuade me to come back to the university, and I said no.

So, they made that arrangement. I came back to Richmond. Mr. Robins and I met in the Downtown Club in a private room with a cup of coffee, and we talked for more than two hours. That was my first knowledge, first meeting, first experience with Claiborne Robins, and that set the stage, from then until his death. And that was 48 years ago.

Because of that meeting, I accepted the presidency. Mr. Robins told me what he expected, I told him what I expected, and he said, “I believe with all the committees, you’re the right person. And if you are willing to come to the University of Richmond, I guarantee you, I’ll see that you never regret it.”

Mr. Robins was a supporter of the university even before he and his wife gifted $50 million dollars, which was the largest gift from a living family in the whole country. We discussed all of those things during our meeting. We discussed my authority as president, the authority of the board, his participation and support of the president, and his leadership of other members of the board. He was giving me his assurance, and obviously he was going to have much power as a member of the board in his persuasion.

From day one, in our first meeting with the University of Richmond Board, he had written to each one of the members insisting that they all be present and support me as the new president. We unleashed many different aspects, in our conversations, of how the future would unfold and his working with me as a board member. I am sure he knew – I certainly knew – he was going to have much influence simply because of his capacity of him making a great investment.

Already serving as a president before, I already knew what I had to do, I knew how the board had to function, and I knew certain members had great influence. We discussed all of that. And that’s why he said, “I guarantee you’ll never regret becoming president.”

My life in higher education

I flunked out of high school. I was a farm boy, and I never dreamed of going to college. I joined the Marine Corps during World War II and I spent four years growing up, and that’s when I became more interested in college. Not having a full high school education paired with the benefits of the GI Bill, I tried to see if I could get into college. Without the GI Bill, there was no possibility. I applied to a senior college and was turned down because I didn’t have a high school diploma. So, I went to a smaller junior college in Kentucky that had 198 students and would take anybody. Thank goodness for it. I’m on the board today, have been for years, and I’m a very strong supporter. And I think of my time there as the foundation in college that provided for my future.

At this junior college, I was in a barrack of World War II veterans — there were 18 of us. We were all on probation because none of us had gone to high school or done well. I spent two years at this college, met my wife there, married there, graduated with a 3.9 average, and then went from there to Vanderbilt University.  When I finished, I joined a public accounting firm. Then I went to audit a college and they employed me as the chief financial officer, so that’s where my higher education administration experience began. I was the president and the chief financial officer of three colleges.

Then, I decided if I was going to spend my life working at a college, I needed a Ph.D., because one day I may want to be a Dean. So, I went back to school and got a Ph.D. I had a wife and six kids at the time.

I later became the head of the Tennessee State Institution of Higher Education as the coordinator of the state system of higher education and headed up the finances of all colleges and universities there.

From there, I became vice president and dean of another college. From there, I was selected as president of Meredith. While at Meredith, I was on some national committees that highlighted my successes (and we really were successful). I was there for five years, and that’s how University of Richmond got word of what I had done, and what I was doing. That’s when they invited me up to be a candidate with 97 others for the presidency of University of Richmond. And lo and behold, I ended up being the one they selected.

How I got off the farm and back into education after flunking out of high school… folks say, “How’d you do that?” I’m not sure I know even today. Happenstance.

Most people give up when they’re not succeeding rather than fighting the battles of succeeding. And the world, as I have found, is always open if you’re working hard on your own to succeed and you discover the place where you’re capable of succeeding – for me that was my financial background. I majored in accounting at the undergraduate level, and that’s how I became a business officer, and then I moved on up to the dean position and so forth until I got to the presidency. 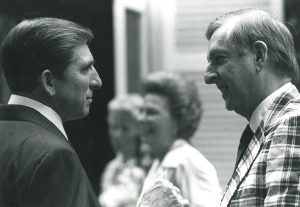 Early on, Mr. Robins made the legal action to found the Robins Foundation. But before then, we would just meet and do pretty much what he thought we ought to do. And then when he passed away and left more money to the Foundation that’s when it became more impressive in what it was able to do. I joined the Robins Foundation Board 48 years ago and served until just a year or so ago.

Before he passed away, in fact, 10 years after I became president, he gave me a letter saying, “more has happened than I ever dreamed could happen in these 10 years.” So, I kept it, along with a few things like it where he’s responded to what his ambition was for the institution and the results of us working together to get it done.

But he was a great friend and a great promoter of everything I was able to do. So, I think of him in positive ways, no matter what age or at what point. And I spoke at his funeral and said much of that at that time because he was a great man and I had worked with him in so many dimensions. We traveled together and he inspired me, and he is the essence of why the University of Richmond is what it is today. It was not just his money, but his participation and his generous spirit and his good will.

One statement I have in my memoirs about him and the family is this…if they had simply given the $50 million dollars – the word simple sounds funny there – and said, “We’ve done our part,” it would’ve been almost nothing compared to what it became. Because they became involved and never left eminent association with the institution.

The Foundation today and those with whom I served over the years, and in more recent years the children and grandchildren as board members, have all been a great source of satisfaction to me. And I sense that with the leadership of the current person, who is doing a great job, it will continue to be even stronger into the future. So, I am very proud to have served with all those folks, and I know it’s going to carry and continue to support the other entity which I’m a part of, and that’s the University of Richmond.

If I had not come back to Richmond, and I had not said, “I will talk to Mr. Robins because I think he’ll make the difference in the future,” who knows where I’d be. The university arranged the meeting, I met with him, and when I left the meeting, I went directly to the university and accepted the presidency.

You never know where the chips will fall or where the ships will sail.

No Events were found.